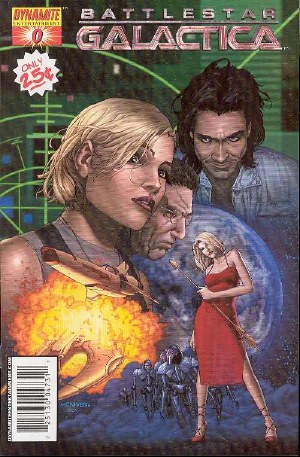 by Greg Pak & Nigel Raynor The wait is over! The new adventures of the crew of the Battlestar Galactica begin here with Dynamite Entertainment, writer Greg Pak, and artist Nigel Raynor! D.E. proudly presents their all-new Galactica series, Making its debut with this special #0 issue featuring an original story ? with a 'dynamite cliffhanger' ending ? that leads into the ongoing series! Pak is an exclusive writer for Marvel Comics, but has carved out this series for D.E. and he's turning out a comic that fans both new and old are going to love. And we're so sure they're going to love it, that this introductory issue is available for just one thin quarter! And what would this issue be without a red-hot Photo cover featuring the beautiful Cylon, "Number Six!" PLUS: A Special preview of Brett Matthews and John Cassaday's Lone Ranger comic book series from D.E.! Featuring an art cover by Steve (Civil War) McNiven, shipped in a 50/50 ratio with the photo cover version. Future covers by Michael Turner, Billy Tan, and other high-profile artists to be announced!