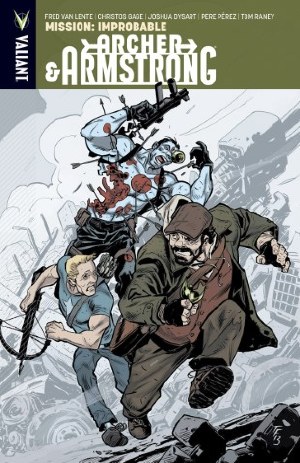 (W) Christos N. Gage, Joshua Dysart (A) Pere Perez, Tom Raney (CA) Tom Fowler. Archer & Armstrong are going to war with Bloodshot and H.A.R.D Corps! (GULP!) That's right* Valiant's globe-trotting adventure duo have been targeted for elimination by Project Rising Spirit's most elite kill crew. Their mission? Assassinate the the newly appointed leader of a homegrown fundamentalist terror sect named...Obadiah Archer?! And if they could take out his mentally ill* alcoholic bodyguard who just happens to think he's a 10*000-year-old immortal* that'd be swell* too! It's an improbable mission with impossible odds. Do Bloodshot and the steely killers of the H.A.R.D. Corps stand a chance against two conspiracy-smashing heroes that never go down without a fight? Find out right here with the complete collection of the mayhem-soaked "Mission: Improbable" crossover* collecting ARCHER & ARMSTRONG: ARCHER #0* ARCHER & ARMSTRONG #18-19 and BLOODSHOT AND H.A.R.D. CORPS #20-21 by acclaimed writers Fred Van Lente* Christos Gage and Joshua Dysart* and all-star artists Pere P rez and Tom Raney! "Yet another solid read...and one of the best* most concise and informative origin tales ever." - Comic Book Resources "Archer & Armstrong continues its winning streak... A great comic." - IGN