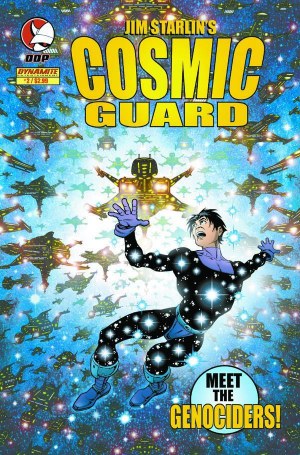 (W/A) Jim Starlin. by Jim Starlin What has young Ray Torres gotten himself into? Just last night, he was minding his own business, planning to jump off of the roof of the orphanage where he lives... and now he's got the voice of a dead super-hero from a distant planet - a hero called the 'Dark Paladin' - in his head! This Dark Paladin says he's charged with the responsibility of preparing Ray to become the next Cosmic Guardian, sworn to protect the galaxy from the Genociders, an evil space-armada whose sole purpose is the destruction of the universe! Ray isn't sure he even believes any of this, but if he hopes to save his fellow orphans from a black market organ-stealing scheme, he may have to start! Cardstock cover by Starlin. FC, 32pg

Show me other "Cosmic---" products