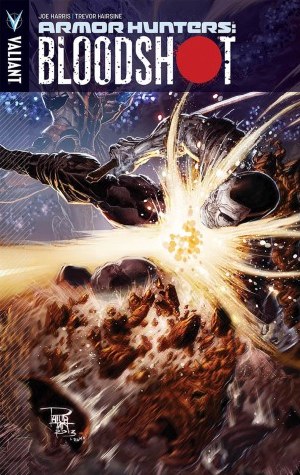 (W) Joe Harris, Matt Kindt (A) Trevor Hairsine, ChrisCross (CA) Philip Tan. The hunters become the hunted! With the major capitals of Earth under siege by the Armor Hunters, the world's most dangerous weapon has decided to come in from the cold - and into the service of the top-secret Military Extraterrestrial Reconnaissance Outpost (M.E.R.O.)! But when one of the Armor Hunters' own stages an extraterrestrial jailbreak inside of M.E.R.O.'s fortifi ed command center, the nanite-enhanced commando known as Bloodshot will become the last thing standing between the galaxy's most feared team of hunter-killers and a classifi ed arsenal of secret weapons far too deadly for human hands! From fan favorite writer Joe Harris (Great Pacifi c, The X-Files: Season 10) and superstar artist Trevor Hairsine (X-Men: Deadly Genesis), start reading here as Project Rising Spirit's most dangerous soldier brings the hunt to the hunters! Collecting ARMOR HUNTERS: BLOODSHOT #1-3, alongside the never-before-revealed origin of Bloodshot from BLOODSHOT#0

Show me other "Armor---" products