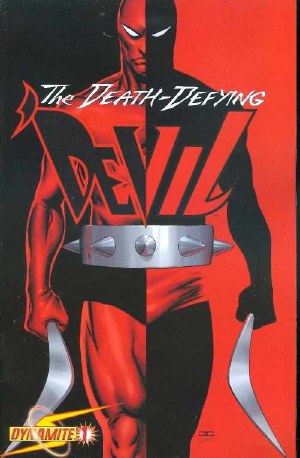 Alex Ross and Joe Casey (W) Edgar Salazar (A) Covers: Alex Ross, John Cassaday, John Romita Sr., Edgar Salazar More exciting comics featuring the greatest heroes of the ages from Alex Ross, Dynamite and Project Superpowers! Joining series mastermind Alex Ross for the debut of The Death Defying ?Devil is writer Joe Casey and Dynamite exclusive artist Edgar Salazar! Spinning out of the events from Project Superpowers Chapter One and bridging the gap before the debut of Project Superpowers Chapter Two, the mysterious ?Devil is put on the case to track down the terrorist organization known as 'The Claw'. Travelling with the equally mysterious Justine, The ?Devil is also shadowed by a new hero that very well may hold the answers to the ?Devil's strange existence, and new clues to the nature of the Urn which imprisoned all of our heroes! Featuring two incredible main covers, one by Ross and the other by John Cassaday, also look for chase covers by John Romita Sr. (inked by Alex Ross) and Edgar Salazar! Retailers, check order form for retailer incentives!

Show me other "Death---" products