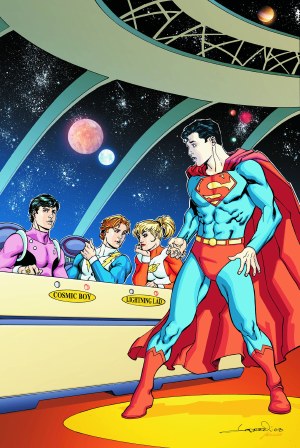 (W) Otto Binder (A) Al Plastino (CA) Aaron Lopresti. Written by Otto Binder Art by Al Plastino Cover by Aaron Lopresti One of the cornerstone stories of the DCU is reprinted in this special issue priced at just $1.00 featuring an important "Origins and Omens" backup tale! To celebrate the upcoming ADVENTURE COMICS #1* we're reprinting a Silver Age classic from the title's prior volume ADVENTURE COMICS #247* the first appearance of the Legion of Super-Heroes! Witness Superboy's first encounter with three super-powered teens from the 30th Century Cosmic Boy* Lightning Lad and Saturn Girl! Featuring a new cover by Aaron Lopresti that's an homage to the original! On sale February 4 * 32 pg* FC* $1.00 US