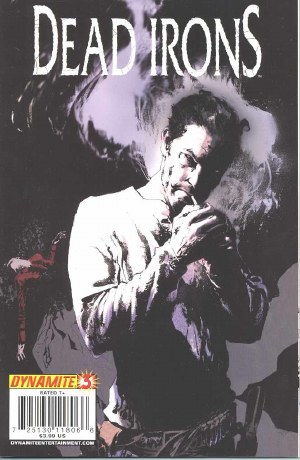 Writer: JAMES KUHORIC Penciller/Inker: JASON SHAWN ALEXANDER North Point is a dead town now. Silas Irons stands alone against an innocent population twisted into the living dead. But facing a horde of monsters isn't the worst thing he will encounter in this walking cemetery. The one soul he most yearns to save will spit in the face of redemption and shatter his tentative hold over the uncontrollable fury deep in his cursed soul. His one shot at salvation gone, Silas must find his way through a haze of merciless bloodshed and destruction. And still the supernatural draw of their resurrected mother pulls all of the Irons siblings closer to a final reckoning with the man that turned them into monsters?Devin Irons. Six guns and the supernatural collide in the explosive Dead Irons saga. Written by James Kuhoric (Freddy vs. Jason vs. Ash), illustrated by Jason Shawn Alexander (BPRD), and based on character designs and art direction by Jae Lee (The Dark Tower).

Show me other "Dead---" products