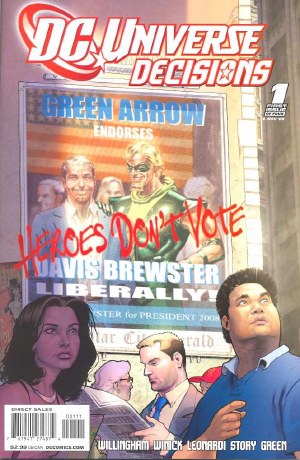 (W) Bill Willingham, Judd Winick (A) Rick Leonardi (CA) Stephane Roux. Written by Judd Winick & Bill Willingham Pencil art by Rick Leonardi Covers by Stephane Roux Election season is upon us, and the stakes have never been higher! An unknown villain is attempting to assassinate the presidential candidates, and only the heroes of the DCU stand in the way. As Green Lantern, Green Arrow, Superman, Batman and more try to learn the killer's identity, they are faced with the difficult task of reconciling their own personal ideals with the mission at hand. Brought to you by writers Judd Winick (GREEN ARROW/BLACK CANARY, TITANS) and Bill Willingham (FABLES, DAY OF VENGEANCE) and featuring sensational art by Rick Leonardi (ROBIN, SUPERGIRL)! Issue #1 on sale September 10 . 1 of 4 32 pg, FC, $2.99 US

Show me other "DC_Universe" products