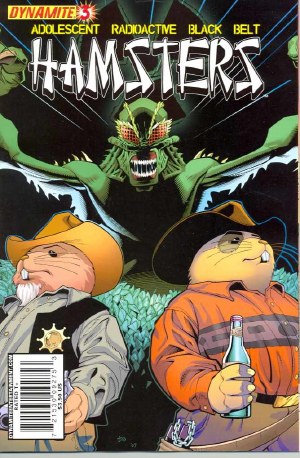 (W) Keith Champagne (A) Tom Nguyen (CA) Tom Nguyen, Michael Avon Oeming. by Keith Champagne & Tom Nguyen Under the watchful eye of original series creator Don Chin, writer Keith Champagne (Countdown: Arena) is joined by artist Tom Nguyen for a comic book series unlike the world has ever seen! Ninjas! Barbarians! Huns! Monks! Hamsters! This series has got it all! After the startling revelations of last issue, the team is assembled, but Ghengis Khann remains large and in charge as he may just hold the key to the Hamsters' past, and future! Look for the special Hamsters alternate cover by Michael Avon (Mice Templar) Oeming!

Show me other "Adolescent---" products