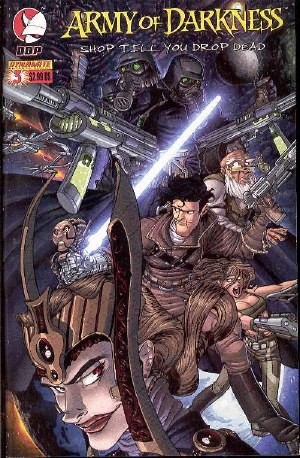 (W) James Kuhoric (A) Sanford Greene. by James Kuhoric, Nick Bradshaw, Sanford Greene, & Jim Charalampidis Move over Buck Rogers, there's a new time traveling hero in the future and he's taking the fight straight to the 25th century pansies. Thrust thousands of years into the future by his Necronomicon wielding boss, Ash discovers that he has become the medieval primitive among the sky dwellers of Deca City One. To get back to his own time he must recover the mythical Necronomicon Program by traveling to the ruins of Under City and defeating a digital army of the dead. It's A.I. vs. Wiseguy as Ash is sucked into the Necronomicon and faces off against a twisted computerized version of himself. Issue #3 features two covers, one by series artist Nick Bradshaw and the other by Sanford Greene, who also provides select interiors on this issue! (Greene ships 1 for every 4)! Collect them both!

Show me other "Army_of_Darkness" products