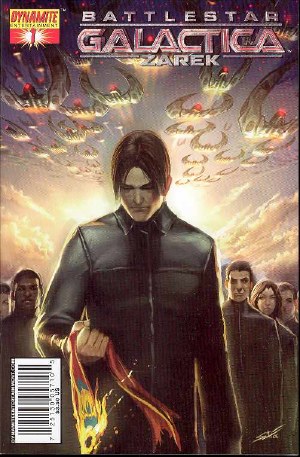 by Jerwa, Batista, & Sejic Just in time for the second half of Season 3 airing on the Sci-Fi Channel in October! Hot on the heels of the best-selling, all-new Battlestar Galactica comic book series from Dynamite Entertainment comes a new Battlestar Galactica mini-series starring Tom Zarek, the loyalty-testing revolutionary played by original series actor Richard Hatch. Revealing content from Zarek's own novel, The Revolution Within, this issue tells the untold origin of Tom Zarek and the Sagittaron colony. The four-issue series delves into Zarek's untold origin as he grows up in a loving home amidst a slave state and alongside a Cyclon force ? all in the shadow of the First Cylon War. It's through these humble and tragic beginnings that he becomes the man we see in Battlestar Galactica today. Written by Brandon Jerwa in his most poignant and powerful work to date, illustrated by Adriano Batista and featuring stunning and cinematic covers by both Batista and Stjepan Sejic, BSG Zarek: The Revolution Within #1 is a must-read! Ships with two Dynamite Alternate Covers in 50/50 split!